In the course of three months, two separate but connected social media movements influenced UK politics, encouraging the reversal of two policies which had negatively impacted on food security. Regardless of your political predisposition, forcing the government’s hand on national food security policy even once is a pretty mean feat.

So how did they do it?

In November 2020, Marcus Rashford’s Twitter storm in response to the UK government’s decision to not extend the free school meals scheme to children over the holidays resulted in a second government policy U-turn, following a similar decision in June. Rashford began sharing tweets from cafes, takeaways, shops and outlets across England who were pledging to offer free school meals during half-term holidays to plug the gap. This encouraged other businesses across the country to follow suit and raised awareness.

The potential consequences of not extending free school meals over the holidays could have impacted over a million vulnerable children. In January 2020, approximately 1.4 million children in the UK claimed for free school meals. Analysis by The Food Foundation estimated a further 900,000 children may have sought free school meals since the start of the COVID-19 pandemic. As well as boosting academic achievement for poorer pupils, free school meals have been linked to lowering obesity levels in recent years.

Rashford’s campaign, motivated in part by his own experience of relying on free school meals in his childhood, led the UK government to commit to extending the voucher scheme into the Easter and Christmas holidays.

The victory was short lived however, as users took to Twitter to share images of the meagre food boxes that had been brought in to replace the voucher scheme. 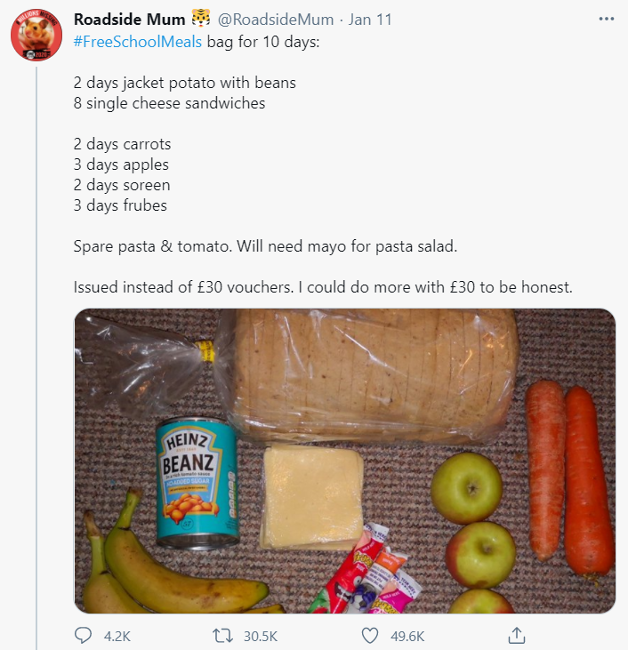 Chef and poverty campaigner Jack Monroe added her voice, using her platform on Twitter to amplify the voices of those decrying the new scheme which gave families a box of food supposedly worth £30. 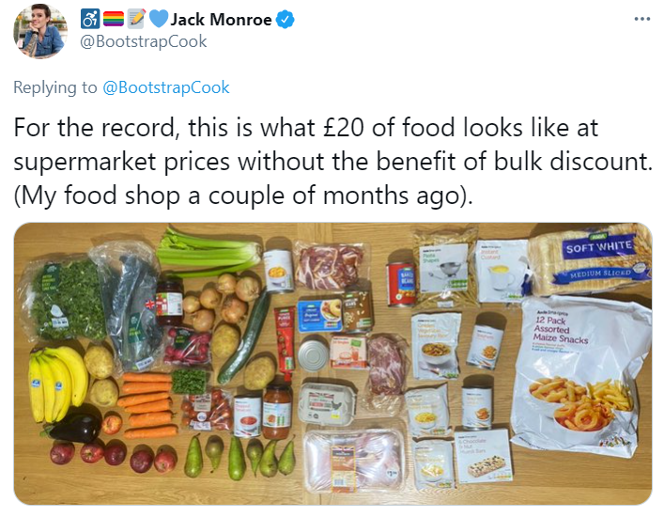 After a social media furore which saw high profile politicians and academics weigh in, the government committed to bringing the voucher scheme back after Prime Minister Boris Johnson publically described boxes depicted on Twitter as “disgraceful”.

Why is feeding school children so pivotal to the achievement of the sustainable development agenda?

SDG 4 Quality Education is critical to breaking generational cycles of poverty, but children who grow up without nutritious food risk facing not only significant barriers to academic achievement, but also to their growth and development.

The impact of poor education on food security also has a cyclical impact, with hunger and poor nutrition impacting the brain’s development and contributing to worse academic performance. Then, lack of a decent education undermines productivity, employability and earning capacity, “leading directly to poverty and hunger.”

Good food is nutritious and makes progress possible. Free school meals have been shown to improve health, help tackle health inequalities and improve classroom behaviour and academic performance. They also help keep children, and especially girls, in school as they provide a way for parents to ensure their children will receive at least one nutritious meal per day.

What can we learn from these UK case studies?

These cases evidence the fact that social media movements can have a significant impact on the achievement of the Sustainable Development Goals (SDGs).

Both Rashford and Monroe embodied ‘nothing about me without me’ by using their platforms to share the voice of those affected by these policies.

With personal experiences of food insecurity, both were able to talk with authenticity about the profound impact free school meals and food voucher schemes have on vulnerable families in the UK.

Both of these examples show the immense power of social mobilisation in harnessing the public mood and impacting government policy. There is power in collective voices and social media can be an excellent way to harness this.

These examples also evidence the fact that there is power in individual voices. You do not need to have an extensive Twitter following; many of those tweeting pictures of food boxes did not. They had a message to share and were amplified by the Twitter community.

Jack Monroe and Marcus Rashford have set an example for others with significant social media presence. They have shown what can be done if you use that platform to highlight the plight of food insecure people, who often times to go unheard. They also evidenced the power of persistence, with Rashford facing several refusals from the government before progress was made, and Monroe working without a break before the government agreed to bring back the voucher scheme.

Put simply, good food makes progress possible. In the wake of COVID-19 which kept 90% of students worldwide out of school at its peak and increased global food insecurity by 82%, governments must be held to account on education and food security in efforts to build back better. These case studies show that social can be a critical tool for doing just this.