The human suffering behind our supermarket shelves

From forced labor aboard fishing vessels in Southeast Asia to hunger among fruit and vegetable pickers in Southern Italy, human rights abuses are widespread among the women and men who produce our food. Human suffering should never be an ingredient in the food we eat. That’s why Oxfam has launched new global campaign “Behind the Barcodes” to raise the voices of millions of small-scale farmers and workers in food supply chains and mobilize the power of the people to help end it.

Melati worked in an Indonesian factory and was trained to peel 600 prawns in an hour – one every six seconds – but said she could never meet this target.

On top of unattainable targets, conditions in the factory were dangerous. When the company put her to work cleaning the conveyor belt with a chlorine mixture, the fumes meant she struggled to breathe. “At 11:30pm when I came home, I still couldn’t breathe properly,” she says.

Through new research, Oxfam found the average earnings of small-scale farmers and workers in the supply chains of 12 common products—from South African grapes, to Peruvian avocados, to Indian tea—is not enough for a decent standard of living.

The global food industry generates billions in revenue every year, but the rewards are overwhelmingly skewed towards the powerful. It would take women like Melati 4,000 years to earn what the chief executive at a top supermarket would earn in a year.

And supermarkets have kept an increasing share of the money their consumers spend at checkout, while the share that reaches workers and food producers has fallen, sometimes to less than 5 percent. 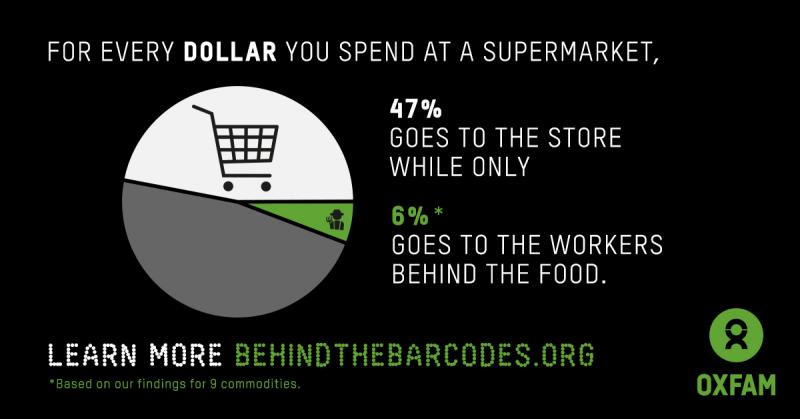 As part of the campaign, Oxfam looked at some of the biggest and fastest growing supermarkets in the US and Europe, assessing how their policies, commitments, and actions affect the workers and farmers – especially women – in their food supply chains. Overall, the findings show that none of the supermarkets are doing enough to support the rights of workers in their supply chains, such as providing a living wage and addressing gender pay gaps.  Here’s how these supermarkets scored:

Because we are their customers, we have the power to demand that the people behind our food are treated humanely and have their rights respected.  You can take action and join the Behind the Barcodes campaign to stand with the people who farm, fish and process the food we buy and call on these supermarkets to end inhumane and dangerous working conditions, provide fair pay for workers and farmers and create safe and decent work for women.

Ways to engage:
1) Learn more about the campaign by checking out our action page: behindthebarcodes.org
2) Follow the campaign on social media: @OxfamAmerica #BehindtheBarcodes #BehindthePrice