By Helle Thorning-Schmidt, CEO of Save the Children International

There is a new and little reported fact about the world today that you might not have heard. It is probably the most frustrating blow to progress for the Sustainable Development Goals yet. Despite decades of things getting better. Despite the resolute and ambitious commitment made by world leaders to end hunger by 2030. Despite the best efforts and intentions of all of us that care deeply about this issue. The number of hungry people on our planet has started to rise again. In a world of self-driving cars and space flight, this is nothing short of shameful.

It might be a little easier for us to bare this fact, if we could take comfort in the knowledge that it was all down to things happening outside of our control. But this is not the case. A rising tide of conflict in the Middle East and Africa is pushing extreme hunger to worrying new levels. None more so than in Yemen, where destructive and violent clashes have driven nearly two million children to the brink of starvation, and put them at risk of deadly diseases such as Cholera that is infecting at least one child every minute.

Drought and ‘water stress’, which we now know affects 2 billion people globally and is getting worse with man-made climate change, is also running strait into a humanitarian system that is simply not funded to deal with it. The consequences of this are all too real across the Horn of Africa, where the worst drought in a generation is placing millions of children in jeopardy.

I have seen the effects of the devastating rise in hunger first hand. Earlier this year, I travelled to rural Kenya, which is in the grip of severe drought. While there, I met one-year-old Aisha*. Her mother had brought her to Save the Children’s clinic, in the forty-degree heat. She was close to end of her strength, very thin, and very sick. Aisha’s family lived in a remote community, miles away from the nearest town. When the family’s animals died, they had no way of providing for Aisha and she was getting one meal a day at best. Aisha was one of the lucky ones. Save the Children put her back on the road to recovery. Yet her story shows us the tragedy of rising hunger for the world’s children. 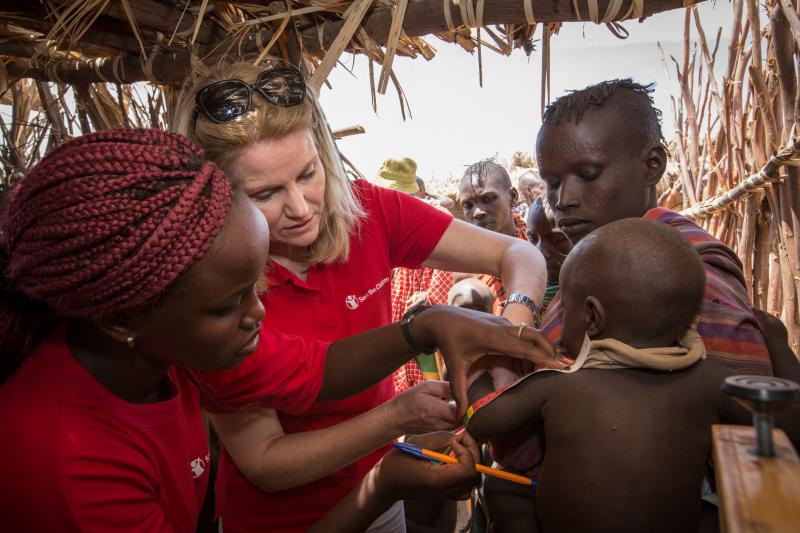 When conflict or climate cut off a family’s food supplies, a child may have to leave their home in desperate and dangerous search for what they need to survive. Without enough good food to eat, children become malnourished and their immune system can get so weak that they easily fall victim to disease. The effects of childhood malnutrition, for those who make it through, can also stay with children for the rest of their lives. About 1 in 4 children worldwide have stunted growth, which can impair their physical and mental development and steal their chance to escape poverty through success at school.

There is no easy fix to all these problems, but make no mistake, the solutions are things we have the power to change. Parties to conflicts around the world need to come back to the peace table and open avenues of access for humanitarian aid to get into war torn areas. Alternatively, if that fails, be pushed by powerful members of the UN Security Council to do so. Donors need to close the funding gap for the famines we are facing immediately and response agencies must work to be as fast, efficient, and effective as possible with the support they receive. All countries must also live up to their commitments under the Paris Agreement, and work even harder in years to come, to prevent catastrophic climate change.

We need to push for solutions like these even harder than we have been. Reminding world leaders of their solemn commitments and demanding more action. That is why this new SDG2 Advocacy Hub is so timely. It can provide a platform for pooling all the efforts of the international community to get us back on track.

If we can turn things around, and start making progress again on eradicating hunger and malnutrition, the benefits will also be huge. Well-nourished children will grow up to be better-educated, more productive, and wealthier adults, who can contribute more to their country’s future. Studies have shown that solving malnutrition could boost the GDP of developing countries by 12 per cent, helping increase the size, strength and ability of their workforce.[1] This is what we have to hope for, and more than enough incentive to make sure we reach our goal of zero hunger by 2030. But as things stand now, we are not going to make it.